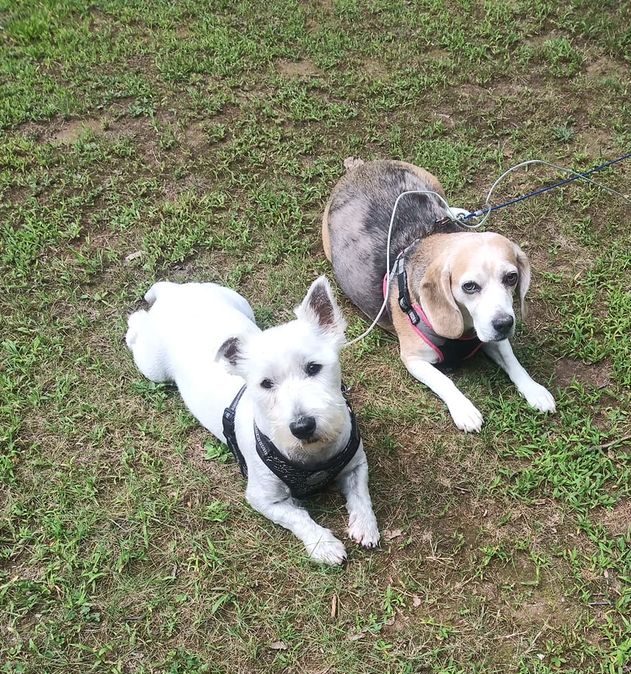 I have two dogs; a fat old beagle named Libby, and a little, spunky Westie named Corky.  Since the pandemic started, and I am working from home, it is my job to take them out first thing in the morning. This is what happens.

Libby runs to the door, cries loudly because I am moving too slowly. Once out, she immediately does her business, sniffs around for a bit, goes back inside has her breakfast and is back in bed, taking all of fifteen minutes or so. Corky, on the other hand, has to run around the house first, not exactly which door he wants to exit, even though he goes out the front door every single morning with Libby. Once outside, he sniffs the air a little bit before he decides which direction he will walk in. Mind you, they are both on long flexy leads and, therefore, must go in the same direction since they are tethered to me. We head for the woods, every morning. Corky sniffs around, rolls in, or eats, poop he finds there. He will wrap himself around several trees, whine because we have put a gate up he can’t walk deeper into the woods where there is better poop.  Libby is pretty much done, trotting beside me thinking of her breakfast waiting inside. Corky is just warming up. He might try to crawl under the porch or start digging a hole. Once we come around the house, he wants to go into the neighbor’s yard to poop. He is not allowed to poop in the neighbor’s yard but every single day he whines and pulls to poop in the neighbor’s yard. Eventually, he gives up and we all go inside. While Libby eats her breakfast, he decides even if he wants to approach his breakfast. He may decide he’d rather chase the cat. He may or may not pick at breakfast. Every few days he surprises us and actually eats it. Eventually, when everything quiets down, he follows Libby back to bed. An hour later, of course, he has to poop.

Corky must find exactly the right spot for his morning poop. He’d prefer the neighbor’s yard but since that isn’t going to happen, he begins to examine the extreme points of our property. Along the way, he has to mark his territory, smell around, find more poop, if he can, and roll in it, and bark at the wind.  He wraps around trees and twigs, me mostly still in my pajamas, trudging through the woods in sandals, drops from last night rain falling on me from the trees, cobwebs wrapping around my face and dirt wedging in my sandals. Finally, at the edges of the property he finds the most perfect spot and poops. He will then happily trot inside and nap for a while.

I never fail to see Corky and Libby as a metaphor for my teaching.  I have some Libby students. They see what they need to do, do it and are done with it. But most of my students are Corky students. They have to ease into learning, try to put it in the context of their day, and are easily distracted by a million other things that are potentially more interesting than learning. They have to give up at least once, maybe even more than once, because they would rather do things their way.  They challenge me to meet me where they are and take me on journeys of patience. But eventually, we get the job done. As we face an autumn of distance education, I think we must give up the concept that all our children are Libby students and understand that, by and large, because they are children, they are Corky students.

I know many people are saying, “Well, just train that misbehaving Westie to do it the right way.” If you are saying that you are neither a parent, teacher nor a Westie owner. Yes, Corky and I are working on it. This morning I tried to reinforce the command “come” so I don’t have to chase him around the house to get him out the door. And, yes, there are some days, when Corky exits, sniffs around, poops and then comes in trailing Libby and drifts off to a long morning nap. Parents and teachers, it isn’t going to be smooth and beautiful.  Most days you will be chasing your Corky students around the house to get them to sit in front of the computer and do something, anything.  You’re busy. You’re tired. You are working from home and, for the love of God! we do the same damn thing every day, can’t they just do it?

I’m going to tell you a secret. Your Corky student is doing just fine. Generations and generations of Corky students have gotten careers, gone to college, become parents, and solved problems.  They’re learning. Some days it won’t seem like it, but they are. And, don’t forget about your Libby student. Take her out and throw the ball around a little.