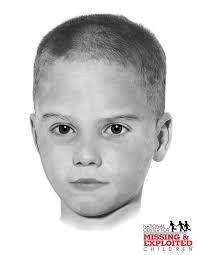 On February 25, 1957, the body of a young boy was found on Susquehanna Road in the Fox Chase neighborhood of Philadelphia.  In 1957, this was not a city location. The area the boy was found was a shrubby undergrowth on a dirt road. The boy was so severely undernourished an exact age could not ascertained. His age was somewhere between three to seven years old. He still had his baby teeth. He had blue eyes and light color hair that had recently been cut. Some of his cut hair clung to his nude body. He had been wrapped in a blanket and placed in an empty bassinet box. The first person who stumbled upon the boy’s body was on February 23rd. A young boy was out snaring muskrats. He did not want to be caught trapping muskrat, as it was not legal, so he did not report it. The next night, a college student trying to peep on a nearby school for wayward girls also stumbled upon the body. He did not report it until the next day. A massive search for the boy’s identity ensued. It has been sixty-two years since the discovery of the boy, and it appears that investigators are no closer to identifying him than they were on the day they found him.

The boy died from blunt force trauma to the head. His body was full of bruises and besides being malnourished, it appears he was abused as well. In 2002, a woman came forward to claim that her parents had purchased the boy from a human trafficking ring. In a fit of rage after vomiting in the bathtub, the girl’s mother beat the boy to death. She remembers being in the car when her mother disposed of the body. Her story has never been corroborated or discounted. The woman has left the country and is no longer cooperating in police.

In 1998, the boy was exhumed and mitochondrial DNA (that is DNA from the boy’s mother) was extracted from his baby teeth. To date, the DNA has not been a match to any DNA tested. I have met people who have a missing sibling or son who have submitted their DNA for testing hoping that it did—or did not—match the boy’s.  I believe that this DNA will someday solve the mystery of the identity of the boy.

The killer(s) of this child is probably dead by this time. Even if the boy could be identified and his killer(s) found, it is too late for justice to be served.  This boy clearly lived a short and miserable life. The very least that can be done for him is to give him back his identity. The chances are slim that anyone will remember and come forward but that doesn’t stop us from helping current and future children from meeting his fate. The saying goes “It takes a village to raise a child.” I want to say, “It takes a village to save a child.”

The neighbor of the Turpin family (the family who starved, abused and chained their thirteen children in California) told the press after the Turpin’s arrest that he had witnessed the children marching for hours in the middle of the night. He never reported this to authorities. If he had reported it perhaps the Turpin children could have been rescued earlier. I cannot stress enough that if you see something that makes you feel uneasy between a child and an adult; you should report it. Yes, sure, you could be wrong. When you are wrong, it is very easy for authorities step in and make sure that everything is OK. You are not being “mean” or “over-reacting” when you are concerned about a child’s well-being. We can’t do anything except hope that the Boy in the Box will be identified and be given the dignity of his name back. But we can help save current and future children from lives of abuse and murder. According to USA today, an average of 450 children a year are murdered by their parents. It seems like an unbelievable number. I wonder how many of those children could have been saved if just one person intervened. Most towns and cities have 800 numbers that you can call and give an anonymous tip.

If you know anything about the Boy in the Box, you may call the Center for Missing and Exploited children at 1-800-843-5678.